Visited the lower slopes of the Sierra Nevada and stayed at Finca Aldabra in Pinos Genil. Checked in and got settled in our room then went to drive to the start of a little walk and found that I had left my lights on and the battery was flat.


The owners kindly jumped the car for us, so off we went to Guejar Sierra for a nice 2-hour walk along the valley which used to be a tram line called El Tranvia de Sierra Nevada, stopping off at Restaurant Barranco San Juan for refreshments.


In the evening we went to Meson Casa Guillermo for a meal and did not really enjoy it.
Went on a road trip next day only to find that we had to change our route which was intended to go to the ski resort as it was full as it is half term this week in Spain. Didn't have a plan B so just made something up, went to a mirador then did a little walk in the snow along a ridge before descending on the road of death to Guejar Sierra.

We did a lovely walk along the old tram line in the opposite direction to the day before taking us from Restaurant Maitena to the end of the walkway where there was another restaurant called La Fabriquilla where we had salad and coffee before returning back along the tram line to the car.


Later that evening we went for a meal at another restaurant in Pinos Genil, La Bella Maria which was much better than the previous night. We had roasted vegetables and squid between us which were very good and a nice bottle of wine.
After breakfast, we decided to walk from the hotel to a campsite which didn't look too far on the map, but when we were following the tracks from the map we found that we had to make a big detour because the track had been blown away by a big quarry, so our little walk ended up taking us 4.5 hours. 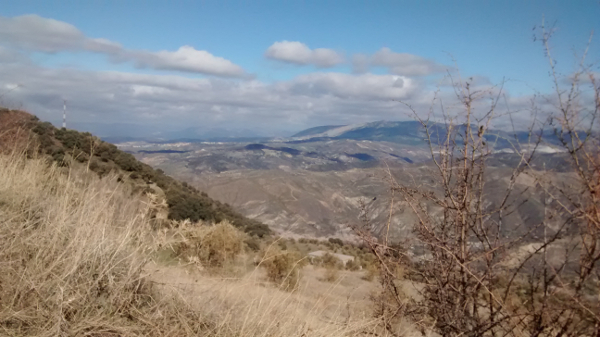