Sightseeing tour of Caceres today after an uneventful start to our tour of Portugal. It is a very nice city and we walked into the old part where there were some lovely old buildings, we got there early and avoided the busloads of sightseers. 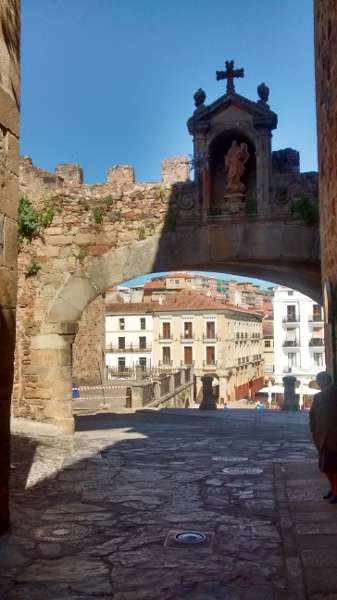 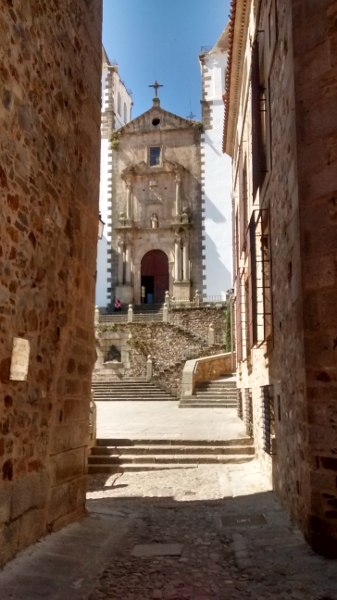 We then drove to Valencia de Alcantara which is only 7 k from the Portuguese border. When we arrived in the village we found free parking on the edge but there were no other cars there. Walking into the centre we thought it was a bit strange that all the bars were closed at 2:30 pm. We only saw 4 people who looked like tourists. Went to look at the castle which was next to a massive church with storks nesting on top, closed like most churches after 2pm. Went up to the castle which wasn't bad and from the battlements, we saw some tables and chairs and went down to find a very nice modern bar where we had a lovely coffee for only a euro. 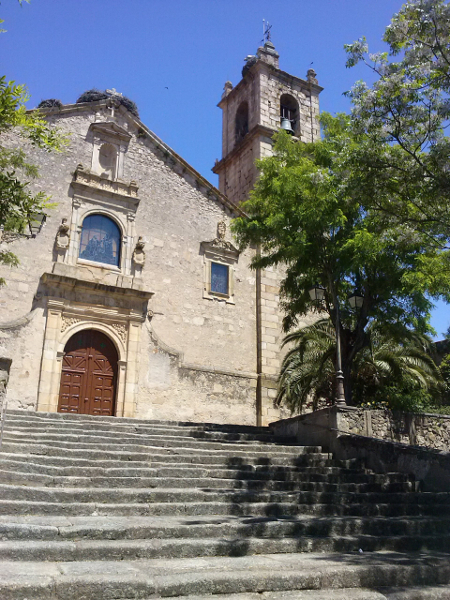 Drove into Portugal, without a map on our Satnav. Managed to find the campsite Camping Lake Portugal at Alverangel combining small and toll roads, could not find out how to pay the tolls. The campsite was nice but did not seem ready for the season as the restaurant was not open and one of the toilet blocks was closed. Could be really nice but a lot of work to do. Went to Tomar today and visited the castle which was really fabulous and well worth a visit. 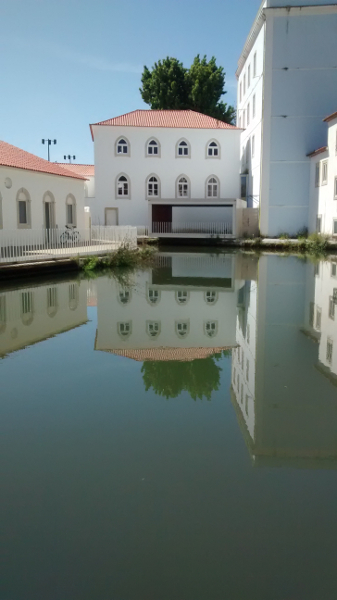 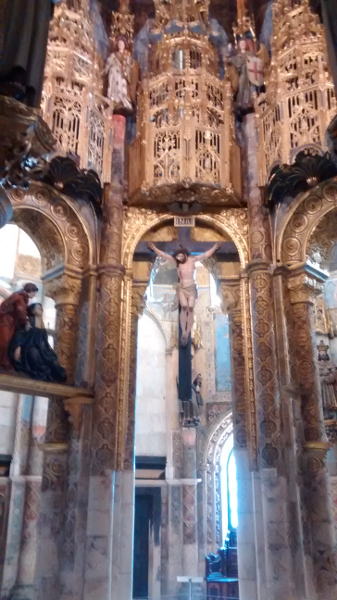 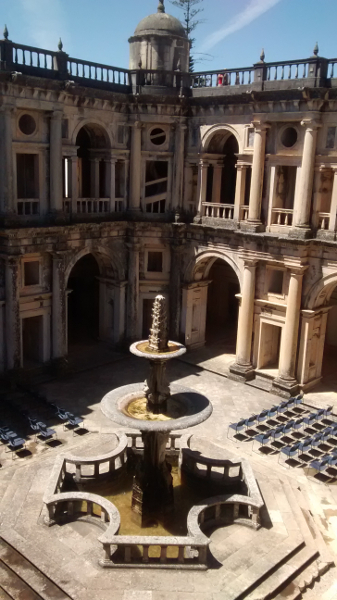 Afterwards called in at a bar for coffee and a sandwich and finally managed to download the map of Portugal after about 5 attempts, so had no trouble finding our next campsite in Nazare at Vale Paraiso Natur Park. It was quite big and we chose a plot but the electric hookup did not work, fortunately, a nice Swiss man on the next plot let us plug into his electricity. The leisure battery felt very hot so we turned everything off.
The next day after breakfast, we walked into the centre of Nazare which was about 2 kilometres from the campsite. It was an old town with streets that looked very Spanish. We arrived at the beach which was beautiful and had a coffee then walked to the marina and back before going up the funicular to Sitio and Scoobie had to go in a cage.

It was nice when we got there but we could not find the monastery that we were hoping to visit. So we made our way back to the campsite and reconnected the electric and eventually the leisure battery got hot again. We disconnected it and decided to leave it and get it fixed when we got home. We had a takeaway of salad and chips for dinner that night from the site restaurant and it was really good value.
Drove to Sierra da Estrela to do a bit of walking we could not find the first campsite after driving down narrow roads into a river valley near Oliveira do Hospital. We tried to find another one the other side of Oliveira eventually found it after following a signpost to an abandoned campsite along a dirt track. The campsite Toca da Raposa, was really nice even though the track to the pitches was very narrow. We did a walk to the nearest village to the site, Meruge, where we had a coffee then made up a route back along the valley to the campsite. Had some lunch then went for a dip in the pool which was a little cold for us. Had a meal in the campsite restaurant which was really nice  they made their own veggie burgers and it cost next to nothing.

The next day we drove further into the mountains of Serra de Estrela trying to find a campsite in the town of Manteigas, eventually found a municipal one just outside the town next to a dry ski slope, which was not as good as the ones we had been staying on but it only cost 11 euros instead of 17, so can't complain. It was a lovely base for walking and we went for a small 5k walk to the nearest hamlet.

The next day we went for a lovely 10k walk along forest tracks.

Drove to Guarda to another municipal campsite which had a 4.1  rating out of 5 so we thought that it should be ok, but it was even worse than the one the night before. Walked a little way from the site to buy some provisions and found a bread shop that did pizzas as well so that was tonight's dinner.
Walked into town to see the sights. Some nice sculptures and worth a visit. 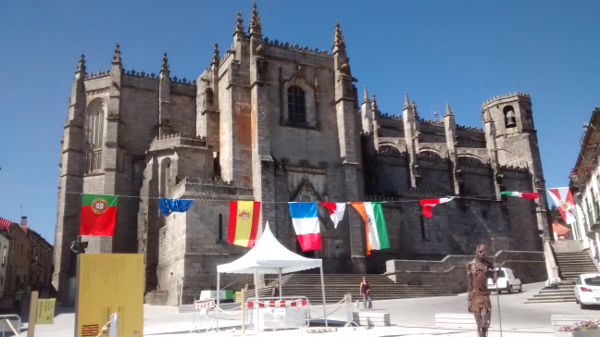 We decided to have a day driving, we went towards Braga and stopped at Arco de Baulhe looking for Campismo Arco Unipessoal, LDA. We could not find the campsite but asked in a bar and they kindly drove their car and we followed. The street down to the campsite was very narrow and we only just managed to get down. On the way, we meet a couple who said that the campsite was full but we decided to continue anyway as there was no room to turn around. When we arrived the owner said that he was full but we could stay in a position for people that arrived late and if someone left the next day we could go in their plot or we would have to leave. Later in the day the owner told us that there was a pitch available for one day so in the morning we moved down to it. After setting up we tied Scoobie to a tree and put our table and chairs out. A few minutes later we noticed a dead rat which wasn't there before we think that Scoobie must have killed it. We went for a lovely walk from the campsite into the countryside then back into the village, then had a swim in the pool to cool down. 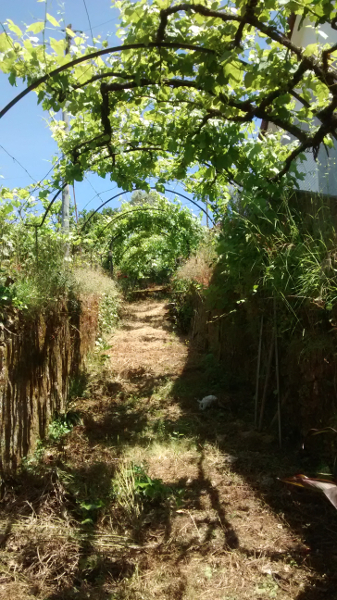 We left the campsite the next day and the owner went up ahead of us to stop any traffic coming down the narrow road from the village.
Got on our way to our next campsite Parque de Campismo de Entre Ambos-os-Rios, Lugar de Igreja. Took the motorway which was a lot faster and arrived safely at a nice campsite on a lake settled in then went for a walk which they told us was 7 kilometres. We took enough water for the duration, but it ended up 13 kilometres luckily we found a font when the water ran out. The campsite had a really nice restaurant Adega do Artur where we tried out the local fair of cod and vegetables and the local wine which we drank in pots like soup dishes, both the food and wine were different but nice.

We left the next morning just as loads of children arrived with canoes, think the site would have been very busy. Made our way to the coast and our next campsite at Parque de Campismo do Paco in Vila Praia de Ancora. It was a very nice campsite that had everything that we needed and was only 11 euros a night. Went for a little walk to the beach which was only about a mile away. Lovely beach, good for surfing. Had a nice walk over the dunes along a boardwalk to a bar where we treated ourselves to ice creams. Next day we walked to the beach again but turned right and ended up in the town of Ancora where we walked along the promenade then had a coffee at a beachside bar. 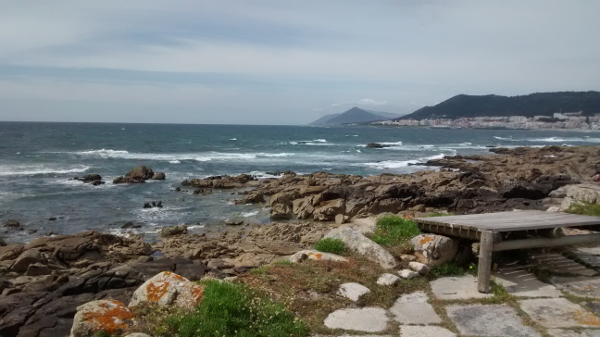 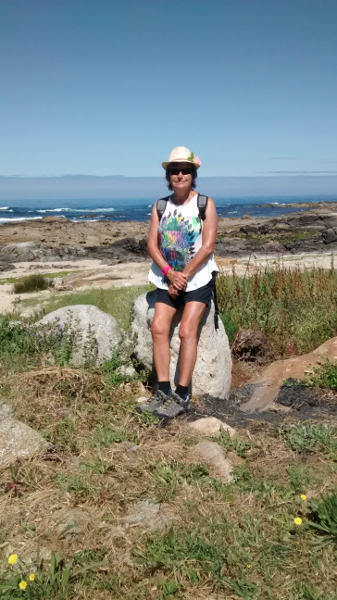 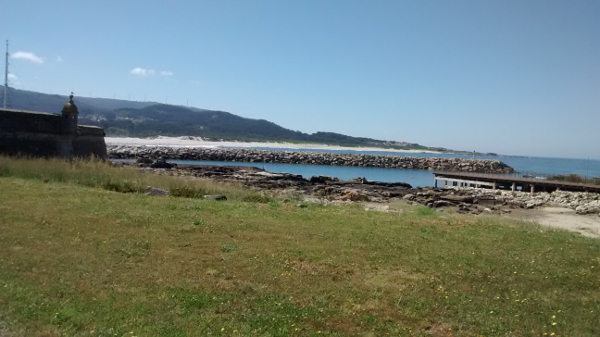 Went back to the site had dinner then watched the England football team underperform against Russia in the European championship.
Left the site the next day and drove towards Porto stopping at campsite Parque de Campismo Sol de Vila Char in Vila do Conde. The site was on the coast and only had a few pitches left. After we had set up we walked the few hundred metres to the beach which had lovely sand but was quite rocky. Walked along the boardwalk again through some really nice bits and some rough bits and had a beer at a beachfront bar. Got ready to go out for a meal tonight. The wine was good but we didn't like the fish dish, not fresh but salted cod and too much oil. 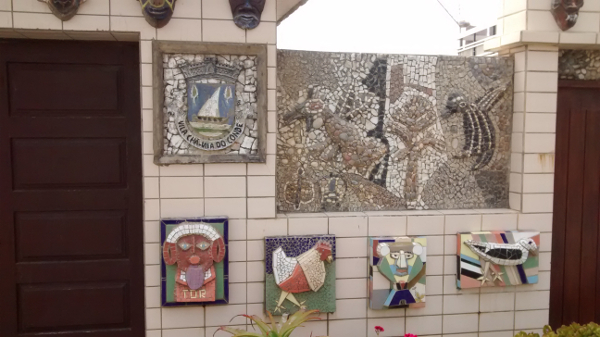 Drizzling when we got up so after we checked the weather forecast for the next few days we went to plan c. Skipped the visit to Porto and a trip along the river Duero and drove to Evora to do some sightseeing. The campsite Orbitur Evora was ok and it had stopped raining but WiFi on the site was not working. The site had nice facilities including a swimming pool which we used a couple of times.
When we left the previous campsite we should have handed in a card that identified our registration, but we could not find it. When we were getting some salad out of the fridge for our meal we found the cards in the fridge!!!!
Walked into the centre of Evora today and spent a few hours taking in the sights. Which included the Cathedral, the Roman Temple, Capela dos Ossos (Chapel of Bones). 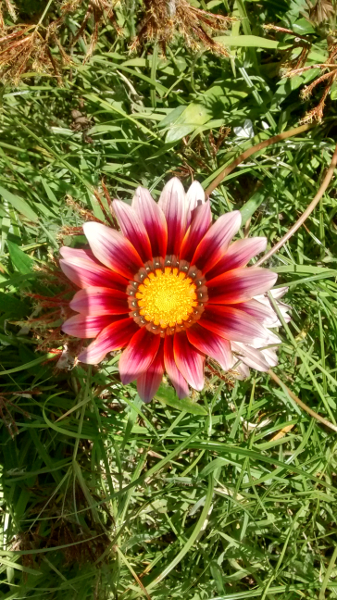 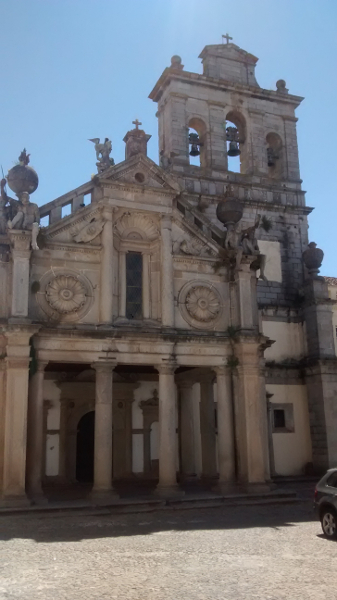 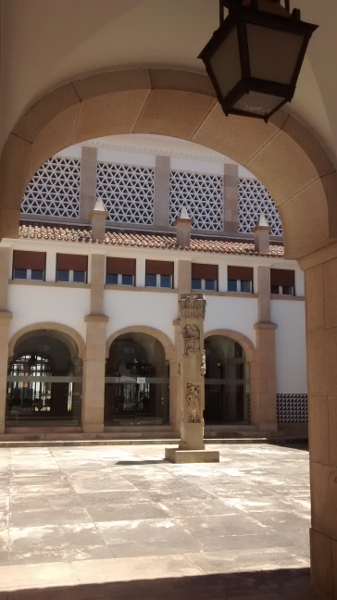 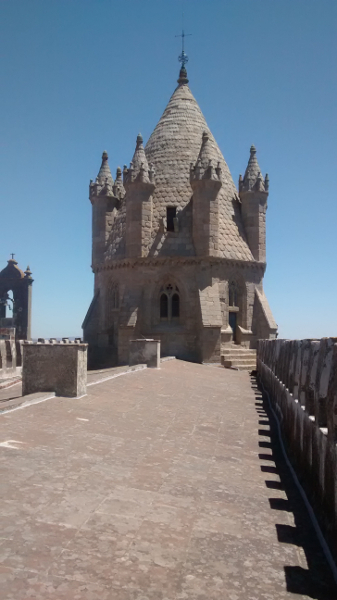 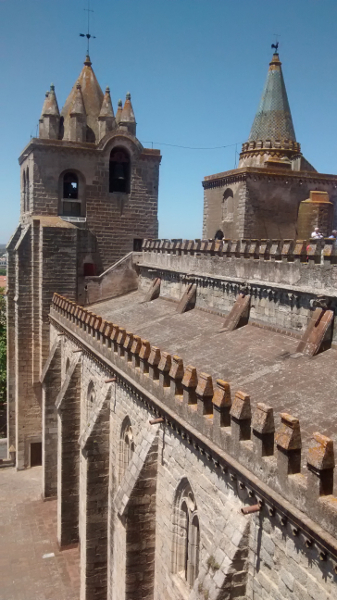 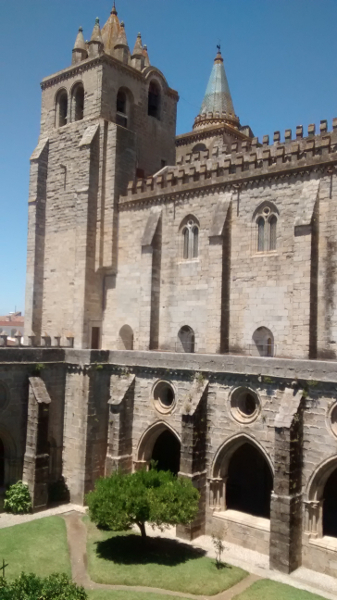 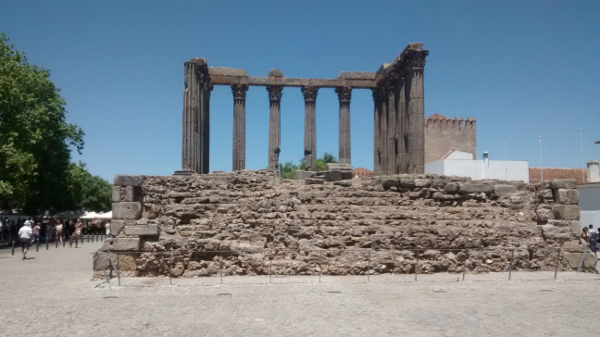 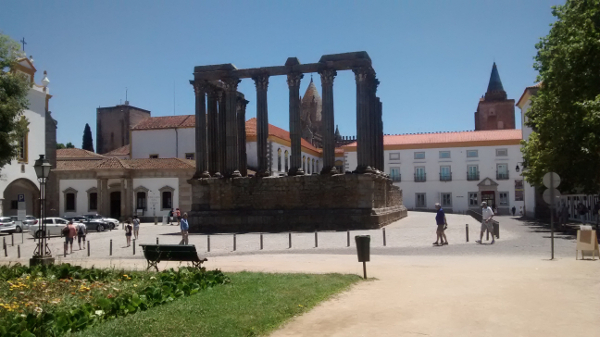 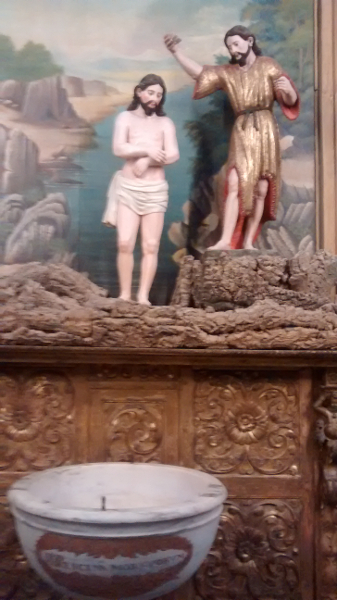 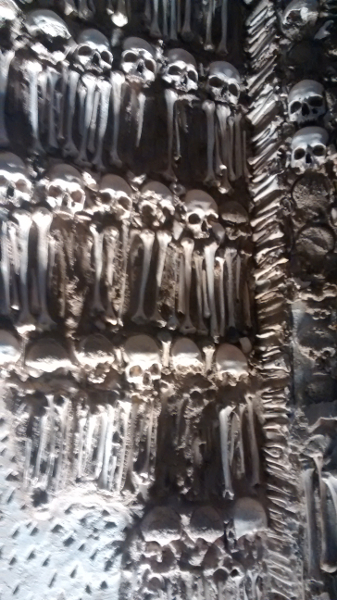 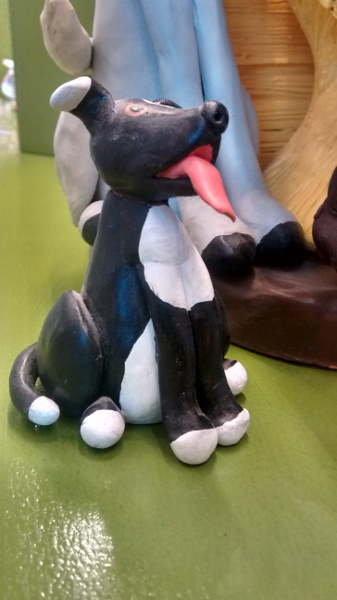 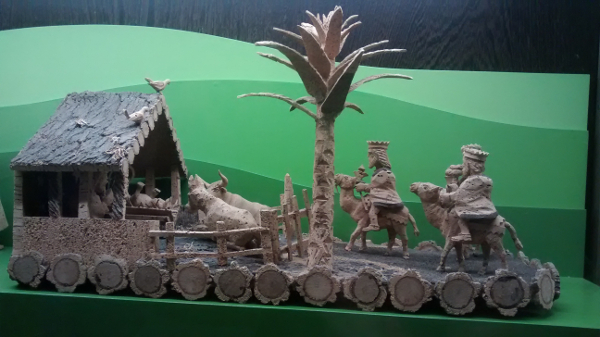 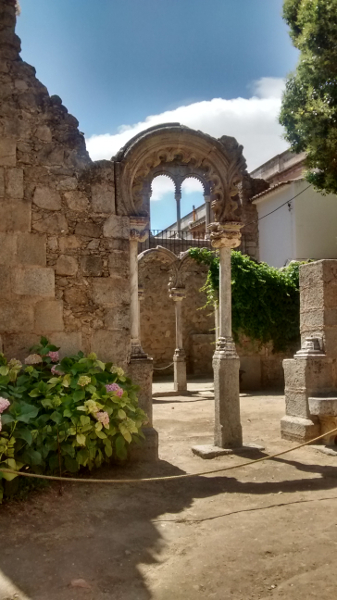 It then started raining so we decided to make our way home. It was too far to drive in one trip so when we got back into Spain we were looking for a small village where we could have a meal and stay the night. We eventually decided on El Garrobo on the N-433 just before Sevilla. We found a nice place to park up for the night opposite a bar where we had a very nice meal, then went to another bar for a beer before retiring for the night. 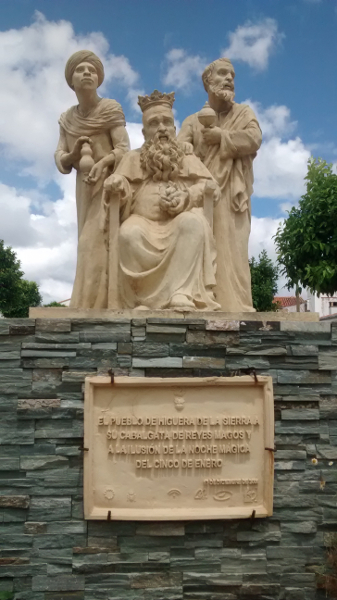 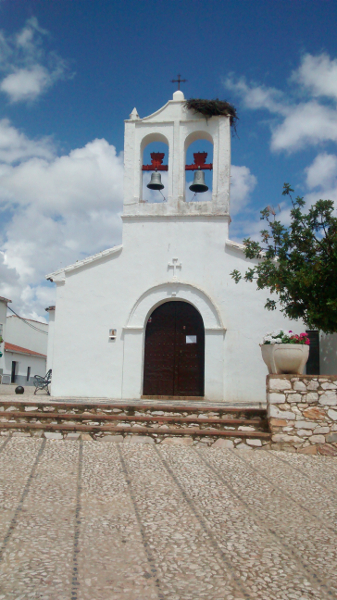 Drove home early the next day without a satnav, not a good idea when you have to go around a big city like Sevilla, got stuck in a traffic jam for a bit but eventually got around the city and no problems after that.