Settled in and then went for a little walk 5km to get some lunch at Casa Emilio. Walked the 5km back to the hotel and relaxed before getting ready to go back to Casa Emilio for dinner, which was very good.
After breakfast at the hotel, we started our walk to Rodalquilar, the first of 2 giant golf ball walks.


The weather was great with beautiful clear skies and we had some fantastic views during the walk which lasted nearly 5 hours. After a couple of hours of walking which included going down a beautiful valley following the Barranco de Requena and along tracks through the old gold mine workings through the abandoned mine workings of San Diego we arrived at Rodalquilar. 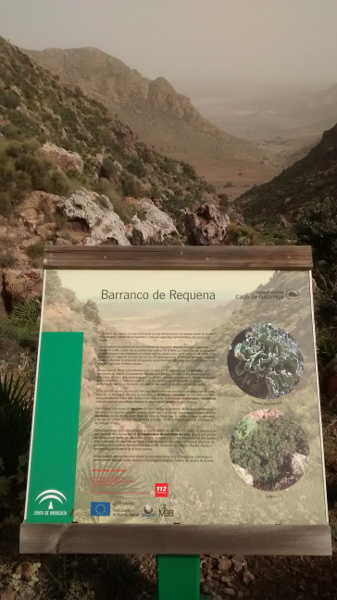 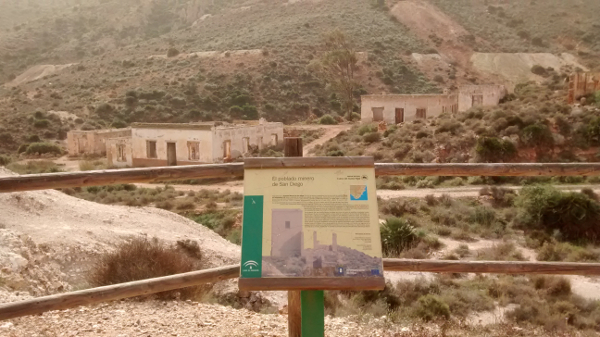 Half of the village is abandoned houses from when the gold ran out and the mines finally closed in 1966 and newer houses that have been built since then. Click the following link for more information about the Lost Gold Mines in Rodalquilar. Unfortunately, for us it was a Monday and everywhere was closed, it was a good job that we had brought a snack with us. From the village, we made our way back to the hotel via tracks and road where we managed to get a nice cup of coffee after our efforts. After a rest and a shower we ate in the hotel restaurant, they also had a Menu del Dia in the evening too but did not include a drink, the meal was OK but not as good as the one we had the night before.


The second of the giant golf ball walks started off fine with a flat part for the first 10 minutes then it started going uphill, what's new, an hour later we were on the top. There were some strange constructions up there, what looked like two archways either side of the track and nothing else around!!


We then came across some abandoned buildings called Cortijo de la Rellana.


Shortly afterwards there was a path leading off to the right of the main track going down Barranco del Negro to La Isleta del Moro.


When we arrived there we had a well-earned cup of coffee before making our way back to the hotel. Later that evening we went back to La Isleta del Moro for a couple of great pizzas at Pizzeria Isoletta.

On our last day of the holiday, we decided to walk to Cortijo del Fraile, a place full of literary history, which inspired Garcia Lorca to write Blood Wedding. So we drove to the small village of Los Albaricoques to start the walk, it has a wild west feel to it with a big sign of a cowboy in the village.


The going was easy out of the village along a flat road, which soon became a track. We followed this for about an hour and 15 minutes before arriving at the Cortijo del Fraile, which was a bit disappointing, as it turned out to be a ruin, for some reason we were expecting more.


Still it was a nice easy walk, we then made up a different route back making it a circular walk lasting about 2 hours 30 in total. We had a coffee in Albaricoques the bar near to where we had parked then made our way back home.