An early start saw us on our way to Madrid courtesy of Iberia from Malaga. Arrived safely and negotiated the metro to our hotel in the centre of Madrid which took about 1 hour 30 minutes. The room was not ready when we arrived so we went to get some lunch. Afterwards, we checked into the room and then started our sightseeing tour by walking about 2 kilometres to the Reina Sofia (Queen Sofia) museum which contains 21000 works of art, we could not see all of them because only 2 floors were open, but we did see works by 20th century artists Pablo Picasso and Salvador Dali, including Guernica by Picasso, we walked around for about an hour and then walked back to the hotel and were a bit tired from our early start.

Had a rest in the room then went over to a restaurant just across the road from the hotel where they did menu del dia on Sunday night, and it was really good. Our hotel was just off Gran Via which is one of the main shopping areas and all the stops were open until around 10 pm with hundreds of people around, a bit of a culture shock compared to our little village at home.

We had a good night's sleep and were raring to go after a nice breakfast at the hotel. Leaving the hotel, we walked around the streets until we arrived at our first museum of the day the Thyssen-Bornemisza Museum which contains over 1600 paintings and was really good. After coffee in the museum, we started to make our way to the next attraction which was the Palacio Real de Madrid (The Royal Palace of Madrid), on the way there we stopped off for lunch in a nice little bar. When we arrived at the palace the was a large queue so we decided that we would come back the next day and went into Madrid cathedral which was next to the palace. The cathedral was nice and by the time we came out the queue at the palace was a lot smaller so we decided to join it and it only took a few minutes before we were in there. The Palace was magnificent and is the official residence of the Spanish Royal Family in Madrid but is now only used for state ceremonies such as the investiture of King Felipe VI in 2014 and the Royal Family do not reside in the palace, choosing instead the more modest Palacio de la Zarzuela on the outskirts of Madrid. From there we made our way back to the hotel to get ready to go out for a meal later. We went to a vegetarian restaurant called Artemisa, which was very good and was only 1 kilometre from the hotel. 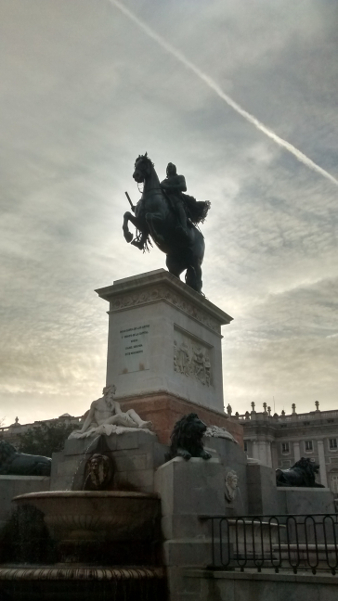 Today we went to Museo del Prado and as it didn't open until 10 am we had a leisurely breakfast before walking there. Got in at 10 am and walked around for about 2 hours before stopping for coffee, which was expensive but was just what we needed. Finished off the rest of the museum then went for a bite to eat before walking around the Parque del Retiro, which was very nice. After that, we went for another walk back to the hotel, where we rested before going out for another veggie meal later. This time, we went to El Vegetarian which was not as good as the one we went to the night before, but it was full. After the meal went to a bar opposite for a couple of beers then walked back to the hotel.

Today we walked to the Templo de Debod which is located in a park all on its own, apart from a lake. It was donated by Egypt to Spain and when we tried to enter the building were told by a security guard to go and stand over by a nearby wall, no reason was given and we could not see any signs. Eventually, we worked out that they only let a few people into the Templo at a time and we had to wait until the ones in there had come out, after going round I am not sure that it was worth waiting for. We then walked  a few hundred metres to the Royal Chapel of St. Anthony of La Florida which is best known for its ceiling and dome frescoes by Goya and is also his burial place. We walked back to the hotel alongside a river then walked around the royal palace gardens which were really nice. Before we went back to the hotel we called in at San Gines which is a famous chocolateria frequented by many stars and had churros and a cup of chocolate to dunk them in, which was okay but way too sweet for us. We had to go there as that is one of the things to do when in Madrid. On the way back to our hotel just across the road they were laying a red carpet and setting up cameras outside a cinema for the film premier of the new Will Smith movie called La Verdad Duele (the truth hurts) and there were people already sitting behind the barriers waiting for him to arrive, we didn't join them. Not sure why Will Smith's name was on the posters as he is not in the movie as far as I could see on the internet,  I think he was there to make an issue about no black actors being nominated for Oscars? Went out for another veggie meal tonight, the third night in a row, we went to Al Natural and it was another good meal.

Had our last breakfast at the hotel, checked out and left our baggage there before walking to our last couple of attractions of the trip. The first one was Real Academia de Bellas Arte de San Fernando which was established by Fernando VI in 1752. Picasso & Dali were both students at this academy which contains works by old masters and many Spanish artists, including a whole room devoted to Goya. The building spreads over 3 floors and contains over 2000 paintings and sculptures. After a coffee to perk us up we walked to the final destination the Caixa Forum which combines an old abandoned electrical station with new construction and on the side wall of the next building to it is a green wall (as in plants growing on the wall) which looked really good. Although it is a contemporary building it contains exhibitions from earlier time periods. As we were going to arrive home late on  in the evening we decided to have a menu del dia, went to Artemisa and had a fantastic meal probably the best ever menu del dia that we had ever had. We then picked up our baggage from the hotel and traveled to the airport. 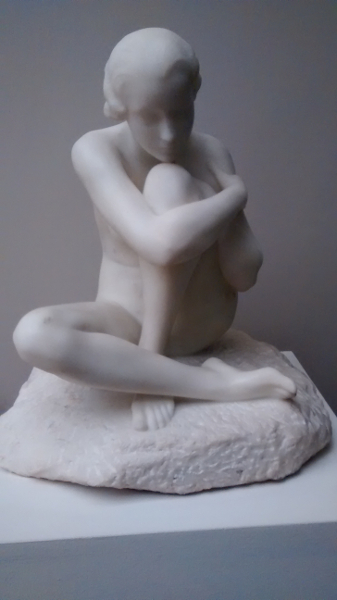