12th September
Travelled to Las Lomas campsite in Guejar Sierra and went out for a lovely meal at a restaurant called Solyar rated number 2 in Guejar Sierra on Trip Advisor (number one was not open that evening) . Had a nice meal outside on the terrace. It had a Moorish feel to it and we would go back again.

13th September
We decided to do part of the Vereda de la Estrella walk only walking for 4 hours 30 minutes as the full walk takes from 6 to 8 hours. We really liked it and will be doing the full walk later in the holiday. 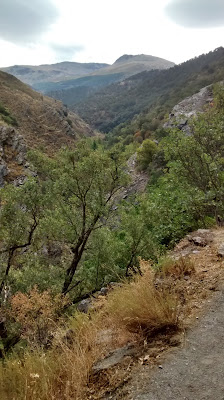 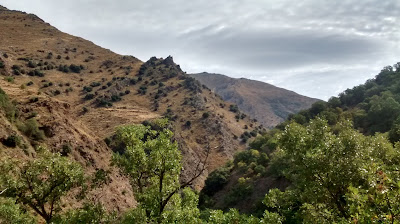 The drive to the start of the walk from Guejar Sierra was horrendous along a single track road with tunnels and part of it was an old railway line. The walk was a gradual uphill trek for 2 hours 30 minutes following the Rio Genil, but well worth it for the magnificent views. We met quite a few people on the trek and 3 cows as well. 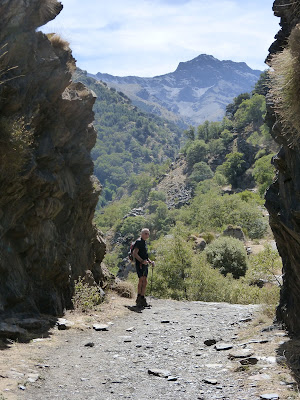 We met a countryside warden who asked us if Scoobie , who was off the lead, was ok with animals and would not chase them, we said yes hmmmm. She was also carrying a bag of rubbish and we discovered why a little later as we caught up with a group of people who were collecting rubbish from around the track which we thought was a great idea as the track was in perfect condition. We walked to Minas Estrella and were about a hour from the end of the track when we turned back so we should be able to complete it next time we try it in about 6 hours 30 minutes.

14th September
Today we decided to walk up to the top of Cerro del Calar it was only 10k but was classed as medium to hard and take 5 or 6 hours. It was uphill from the start at Fuente de Dieciseis Canos (font of 16 pipes) and quite steep in places. The going got easier when we reached an old mine entrance and then we reached two crosses. Not sure why they are there.

We eventually arrived at some bunkers left over from the Civil War and some gun emplacements too. Nice views though. We continued up to the trig point at the highest point of the walk which was 1878 metres at Alto de Calar. We had been going for 2 hours 20 minutes by then all uphill so we had a little rest and a bite to eat. From this vantage point you get great views of Veleta and Mulhacen.

We then made our way back to the car which took us another 2 hours 45 minutes a long walk but well worth it.

It started with a steep ascent with great views which was fine but then we entered a section of the walk described as 'enter a tree and scrub section where the ground is damp and there is water running out of a couple of springs' well I think the water had been running for a number of years as that section of the path was badly eroded and was very difficult to cross. We eventually made it across and made the high point of the walk at 1350 metres and past another gun emplacement from the civil war with great views of the Rio Genil.

From this point on it was all downhill along a forest track then a road. We had thought the walk was going to be a coffee crawl as we passed 3 bar/restaurants but sadly it did not work out that way, as the first one was closed the second the coffee was cold and we did not bother with the third one. It was a lovely 3 hour walk though apart from the eroded path part and a cup of cold coffee.

16th September
Did the whole of the Vereda de la Estrella today. It started out being a bit cloudy but by the time we were walking it was perfect conditions. It took us 3 hours from Barranco San Juan to Cueva Secreta of gradual uphill walking for us to get to the high point of the walk at 1792 metres and arrived at Cueva Secreta where we stopped and had lunch.

Scoobie was very good and stayed with us all the way up but I the way back down she picked up some animal scent and disappeared on two occasions but came back both times. We were feeling tired on the way down and took it steady and it took us another 3 hours to get down back to the car. It was long but lovely walk and we will definitely be doing it again.