We decided to go up into the hills of the Sierra Nevada to get some relief from the stifling heat at home.
Left home Wednesday evening in the motorhome. It had been too hot for weeks now so we decided to go up towards Sierra Nevada to see if it was any cooler there. We had a yoga class on Thursday morning near Iznajar and we decided to go to the lake for the night. On the way there we stopped off for a meal at a lakeside restaurant, which was very nice. Later we sat on the beach and
had a glass of wine whilst watching the sunset. After a few more glasses we went for a midnight swim.

It was very hot in the motorhome and we did not get much sleep that night.
We got up and went to the yoga class which was very good then made our way to the Reina Isabel campsite in La Zubia got settled in then went for a swim in the pool. Had an easy day for us swimming and sunbathing at the pool.

Friday morning was nice a bit cloudy so it was cooler and we went for a walk. Drove up to a font just outside Cumbres Verdes parked up and walked for 2.5 hours it was good weather for walking.

During the walk Scoobie disappeared but came back to us just before we had finished. Had a coffee at the restaurant next to the font then went back to the campsite for late breakfast early lunch. After lunch we went for a swim and had a game of scrabble. Later we went for a meal at the number one restaurant in La Zubia Taberna Hita. where the tapas and wine were great as was the service but the fish dishes that we had were a  little too salty for our liking. On the way home as we were walking past a park we could hear music so we went in to take a look and there was an orchestra playing so we stayed to watch and it was really good. 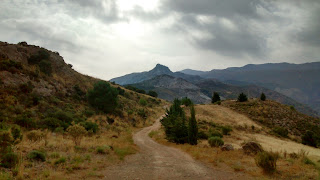 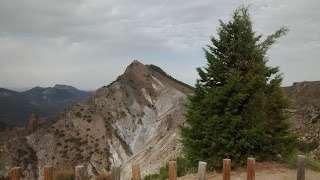 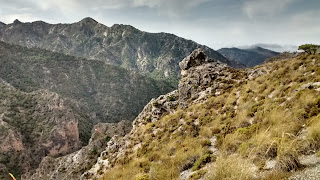 When we woke up the next day the sun was back so we had a quick breakfast and went for a walk. We started walking at 8:15 and it was flat or downhill for the first 45 minutes then we walked uphill for the next 2 hours but luckily it was in the shade through a forest. Originally we had planned to do about 3 hours but added more to the walk so we were walking for 6 hours of which about 4 hours were uphill. We ended up by ascending Cerro Huenes and following the track back down to Puente de los Siete Ojos (Seven-eyed bridge) to the major track back to the motorhome.

By the time we finished it was getting really hot but we had a breeze in some parts so it was ok. At the end of the marathon walk we had coffee and tostada in the restaurant and then drove back to the campsite and had a float in the pool.

Got up early again and walked the same route that we did on Friday but in reverse.
Lots of cyclists and runners on route as Sunday morning is popular for sporting activities. Only saw a couple of walkers though. We timed it right as the bar was just opening for our coffee and toast as we finished our walk. Very hot today and a little tired from our 6 hour walk yesterday, so 3 hours today was just right. Went to Taberna Manu restaurant for our dinner and we liked it better than the other one.

We decided to have a leisurely breakfast today followed by a swim in the pool then make our way home. After the swim it was cloudy so we thought we may as well do a walk. We drove to the font again and started walking, guess what the sun came out after about 20 minutes, but we were in the shade some of the time so we decided to carry on with the walk.  We decided to let Scoobie off the lead and she was ok for the first half an hour but then disappeared. She came back eventually and stayed with us most of the way round. It turned out to be a very nice 3 hour walk apart from the last 30 minutes when we were in the sun all of the time. As we were parked at a font we put some water into the motorhome and had a nice cold shower to cool us down.

We made our way back home where it was even hotter than the Sierra Nevada and we wished that we had stayed for a lot longer. 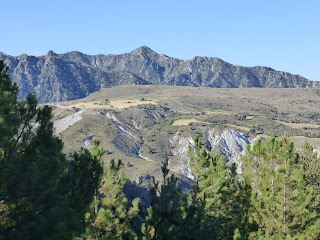 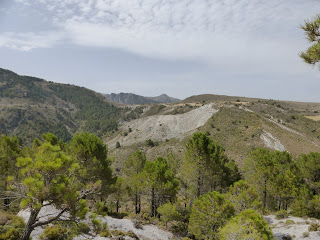